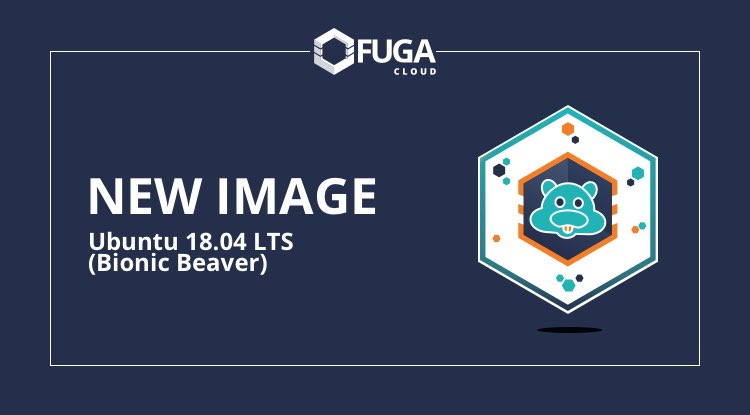 Ubuntu 18.04 LTS (codenamed Bionic Beaver) has been released on 26th April 2018. This release is now available on Fuga Cloud.

Ubuntu 18.04 is the latest LTS version. LTS stands for Long Term Support, which means that these versions will receive updates and security fixes for a duration of 5 years, whereas the regular version will only be supported to 9 months after release. LTS versions are released every 2 years. The last LTS release was Ubuntu 16.04 LTS (codenamed Xenial Xerus).

One of the biggest changes that you will notice is that ifupdown has been replaced with netplan.io. For most usecases you don’t have to change anything here, but in more complex setups you might want more control over your network configuration:

The old ifupdown configuration was located in /etc/network/interfaces. This will now display a warning that it has been depricated.

More information on netplan.io can be found here.

QEMU in Ubuntu 18.04 now has RDMA support enabled as over the past year much unification in the RDMA-core project has occured.

Migrations from former versions are supported just as usual. When upgrading it is always recommended to upgrade the machine types, allowing guests to fully benefit from all the improvements and fixes of the most recent version.

libvirt has been updated to version 4.0. The packaging now builds libvirt storage drivers as pluggable libraries. This slims down the installation requirements but some drivers of less general interest will now be found in universe. (ex: gluster, sheepdog, zfs)

The recommended server for the NTP protocol on Ubuntu 18.04 LTS is now Chrony in stead of NTPD. It is highly recommended not to change this back to NTPD, as NTPD will only receive best-effort security maintenance from now on.

The version was updated to 18.2. Notable new features include:

Nginx was updated to version 1.14.0. New features include the mirror module, HTTP/2 push, and the gRPC proxy module.

Update Jan 18th This morning, January 18th at 06:00 CET, the implementation of the security patch for our network controllers didn’t go as expected. After patching and restarting the control layer at 07:15 CET, networking encountered a bug. It took us until 08:13 CET to get networking operational. From this point on, there were no issues with running services, however, our API backend remained unstable until 13:15 CET. The timeline is available on our status page.