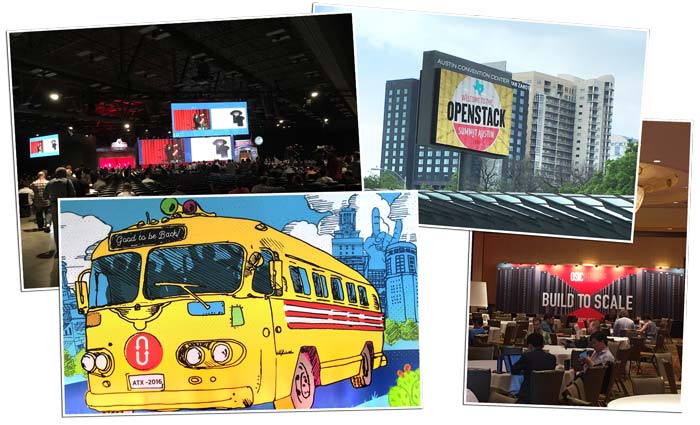 The twice-annual OpenStack Summit wrapped up last month in Austin, Texas. It brought together 7,500 developers, users, and other open source cloud enthusiasts from around the globe (for comparison: the very first OpenStack Summit also took place in Austin, in July 2010, and attracted 75 attendants). Our managing director Paul Bankert was present in Austin to stay closely informed on new developments and trends in OpenStack, as well as to discover what’s on the development horizon for the next OpenStack Release (Newton).

From the attendance and subjects covered by the different presentations and workshops, it’s become clear that OpenStack has really become mature. Where the OpenStack conference in the past was mainly an event for developers and operators, visitors are now far more diverse. OpenStack has been embraced by people from all roles and positions within organizations. OpenStack has evolved from maturity into ubiquity. From the community to the enterprise, OpenStack is everywhere.

Besides the nature of the visitors, OpenStack’s maturity can be seen from the different projects and implementations presented in Austin as well. All core projects can be now be relied upon to work as intended and form a stable basis for new tools and services. There were many presentations on projects that combine different OpenStack projects and other technologies to build smart applications covering all sorts of areas, such as storage, back-up and disaster recovery, upgrade procedures, continuous integration and container services. People know their way around OpenStack and now combine these existing technologies to build new, innovative applications.

We can conclude that both OpenStack technology and its user base have become mature. It’s now time for diversification and deepening of its application. OpenStack’s architecture and method of components working together with APIs has become the industry-wide, de facto standard in which new projects and technologies are being built. Combined with an IaaS cloud market that’s still growing exponentially in the coming years, the future is looking extremely bright for OpenStack.

Two years after the previous Long Term Support (LTS) release of Ubuntu – 14.04 Trusty Tahr – it’s time to move on to version 16.04, Xenial Xerus. This LTS was released on the 20th of April 2016 by Canonical and is now available in our Fuga Glance image library. While new Ubuntu Desktop and Server releases appear every six months, LTS versions are released every two years, and are supported by Canonical for five years after release.